React is, in our opinion, the premier way to build big, fast Web apps with JavaScript. It has scaled very well for us at Facebook and Instagram.

One of the many great parts of React is how it makes you think about apps as you build them. In this document, we’ll walk you through the thought process of building a searchable product data table using React.

Start With A Mock

Imagine that we already have a JSON API and a mock from our designer. The mock looks like this: 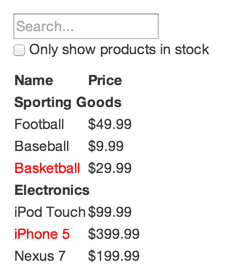 Our JSON API returns some data that looks like this:

Step 1: Break The UI Into A Component Hierarchy

The first thing you’ll want to do is to draw boxes around every component (and subcomponent) in the mock and give them all names. If you’re working with a designer, they may have already done this, so go talk to them! Their Photoshop layer names may end up being the names of your React components!

But how do you know what should be its own component? Use the same techniques for deciding if you should create a new function or object. One such technique is the single responsibility principle, that is, a component should ideally only do one thing. If it ends up growing, it should be decomposed into smaller subcomponents.

Since you’re often displaying a JSON data model to a user, you’ll find that if your model was built correctly, your UI (and therefore your component structure) will map nicely. That’s because UI and data models tend to adhere to the same information architecture. Separate your UI into components, where each component matches one piece of your data model. 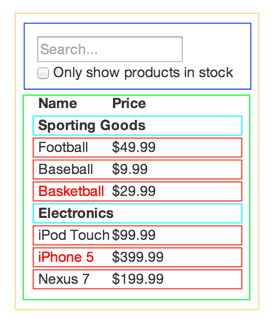 You’ll see here that we have five components in our app. We’ve italicized the data each component represents.

If you look at ProductTable, you’ll see that the table header (containing the “Name” and “Price” labels) isn’t its own component. This is a matter of preference, and there’s an argument to be made either way. For this example, we left it as part of ProductTable because it is part of rendering the data collection which is ProductTable’s responsibility. However, if this header grows to be complex (e.g., if we were to add affordances for sorting), it would certainly make sense to make this its own ProductTableHeader component.

Now that we’ve identified the components in our mock, let’s arrange them into a hierarchy. Components that appear within another component in the mock should appear as a child in the hierarchy:

See the Pen Thinking In React: Step 2 on CodePen.

Now that you have your component hierarchy, it’s time to implement your app. The easiest way is to build a version that takes your data model and renders the UI but has no interactivity. It’s best to decouple these processes because building a static version requires a lot of typing and no thinking, and adding interactivity requires a lot of thinking and not a lot of typing. We’ll see why.

To build a static version of your app that renders your data model, you’ll want to build components that reuse other components and pass data using props. props are a way of passing data from parent to child. If you’re familiar with the concept of state, don’t use state at all to build this static version. State is reserved only for interactivity, that is, data that changes over time. Since this is a static version of the app, you don’t need it.

You can build top-down or bottom-up. That is, you can either start with building the components higher up in the hierarchy (i.e. starting with FilterableProductTable) or with the ones lower in it (ProductRow). In simpler examples, it’s usually easier to go top-down, and on larger projects, it’s easier to go bottom-up and write tests as you build.

At the end of this step, you’ll have a library of reusable components that render your data model. The components will not have any useState() or useEffect() or similar calls since this is a static version of your app. The component at the top of the hierarchy (FilterableProductTable) will take your data model as a prop. If you make a change to your underlying data model and call ReactDOM.render() again, the UI will be updated. You can see how your UI is updated and where to make changes. React’s one-way data flow (also called one-way binding) keeps everything modular and fast.

Refer to the React docs if you need help executing this step.

A Brief Interlude: Props vs State

There are two types of “model” data in React: props and state. It’s important to understand the distinction between the two; skim the official React docs if you aren’t sure what the difference is. See also FAQ: What is the difference between state and props?

Step 3: Identify The Minimal (but complete) Representation Of UI State

To make your UI interactive, you need to be able to trigger changes to your underlying data model. React achieves this with state.

To build your app correctly, you first need to think of the minimal set of mutable state that your app needs. The key here is DRY: Don’t Repeat Yourself. Figure out the absolute minimal representation of the state your application needs and compute everything else you need on-demand. For example, if you’re building a TODO list, keep an array of the TODO items around; don’t keep a separate state variable for the count. Instead, when you want to render the TODO count, take the length of the TODO items array.

Think of all of the pieces of data in our example application. We have:

Let’s go through each one and figure out which one is state. Ask three questions about each piece of data:

So finally, our state is:

Step 4: Identify Where Your State Should Live

See the Pen Thinking In React: Step 4 on CodePen.

OK, so we’ve identified what the minimal set of app state is. Next, we need to identify which component mutates, or owns, this state.

Remember: React is all about one-way data flow down the component hierarchy. It may not be immediately clear which component should own what state. This is often the most challenging part for newcomers to understand, so follow these steps to figure it out:

For each piece of state in your application:

Let’s run through this strategy for our application:

Cool, so we’ve decided that our state lives in FilterableProductTable. First, use useState to setup the initial state of your application:

You can start seeing how your application will behave: set filterText to "ball" and refresh your app. You’ll see that the data table is updated correctly.

See the Pen Thinking In React: Step 5 on CodePen.

So far, we’ve built an app that renders correctly as a function of props and state flowing down the hierarchy. Now it’s time to support data flowing the other way: the form components deep in the hierarchy need to update the state in FilterableProductTable.

React makes this data flow explicit to help you understand how your program works, but it does require a little more typing than traditional two-way data binding.

If you try to type or check the box in the current version of the example, you’ll see that React ignores your input. This is intentional, as we’ve set the value prop of the input to always be equal to the state passed in from FilterableProductTable.

Let’s think about what we want to happen. We want to make sure that whenever the user changes the form, we update the state to reflect the user input. Since components should only update their own state, FilterableProductTable will pass callbacks to SearchBar that will fire whenever the state should be updated. We can use the onChange event on the inputs to be notified of it. The callbacks passed by FilterableProductTable will call setState(), and the app will be updated.

Hopefully, this gives you an idea of how to think about building components and applications with React. While it may be a little more typing than you’re used to, remember that code is read far more than it’s written, and it’s less difficult to read this modular, explicit code. As you start to build large libraries of components, you’ll appreciate this explicitness and modularity, and with code reuse, your lines of code will start to shrink. :)